As a gist, prefer direct mmap with MAP_POPULATE|MAP_SHARED|MAP_ANONYMOUS over std::vector or malloc that uses mmap internally with MAP_PRIVATE|MAP_ANONYMOUS.

Continue to read if still interested in the details.

Why is the kernel eating my cake?

We recently rewrote one of our legacy large scale biometric matcher product (a custom map-reduce implementation) that uses multi-process architecture to multi-threaded architecture so that it uses less resource to run in a docker container on Kubernetes as the per-process overhead can be eliminated. We rolled this out to few cloud deployments with smaller gallery sizes in the order of hundreds of thousands and it all went well. At least until we pushed the system to it’s limits and increased the gallery sizes to tens of millions.

On a host machine with 96 core and 256 GiB RAM, 235 GiB was filled with the gallery to be searched and each of the CPU core was affined to a search worker thread so that the searches are efficient. The default tmpfs on the host was untouched and was left at 50% (128 GiB) on /dev/shm/ where POSIX shared memory is managed. System swaps were turned off to ensure there are not major page faults. The docker container loaded all the datasets from the file system without any hiccups. The expectation was the response time per request will be around 11 seconds per core/request as the algorithm skims through the datasets, looking for a biometric match. When the performance/load tests were started with 96 concurrent search requests, system/kernel CPU usage spiked up and in turn increased the response latencies by 10 folds. We anticipated to see ~1% system CPU usage as we had carefully designed all the memory allocations and locking strategies to ensure there are no page-faults. But it turned out to be false.

It was initially an intriguing observation as this behaviour was not observed with the multi-process architecture that’s running rock solid across various data centers in the world. But the root cause became clear as the request concurrency was gradually increased from 10, 20, 40, 60, 80 and 96. When the concurrency was gradually increased, the kernel CPU didn’t spike up and the response time average and standard deviation stayed pretty low and consistent across runs when we hit the peak concurrency of 96. It continued to stay consistent for over an hour without any problem.

Major page faults cannot be the influencing factor since the swaps were turned off. There was a clear correlation between kernel CPU usage spike, awk '{print $10}' /proc/$(pidof X)/stat and dstat --vm. The minor page faults were in the order of 2500k. This is way over the average 500 limit. We figured that the page table translation failures and TLB misses causes minor page faults in the kernel and the CPU cycles were spent to populate the page table. 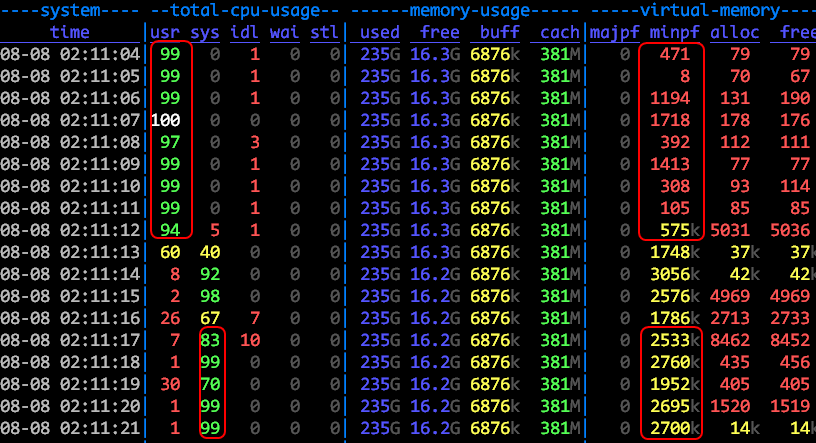 Since the app that runs in the container is multi-threaded, naturally the tendency is to think that std::vector is the ideal container of choice to store the gallery in memory. Unless it is resized it doesn’t reallocate and expand the virtual memory region by a factor of two. The use case and the decision was to allocate once and to NEVER resize it, ever. Thus the memory was better optimized and the CPU usage was as well. This is mostly true, but not for high performance computing systems, as noted below.

This can be asserted with a fooboo:

Compule and run this with:

And this will be observed.

As long as size is less than or equal to 127 KiB (precisely 131048 bytes), per allocation, glibc will expand the heap using the brk system call. If it is 1 byte more than that, it will use mmap with MAP_PRIVATE|MAP_ANONYMOUS to get the heap memory. 127 is again a magic number because the memory allocator tracks the number of 1 KiB pages per allocation in a signed char data type. On exceeding that, it uses mmap instead of brk to expand the heap region of the process.

Our biometric datasets are sized at 1 GiB for easier file management as we could turn on transparent huge pages, if required. So it is guaranteed that mmap is being used under the hood by std::vector, so why was there page table misses in the first place? That’s because the MAP_PRIVATE flag instructs the kernel to turn off VM_SHARED flag when creating the mapping in the kernel. This causes page tables and TLB to be cold and populate it only on demand, via page faults. As long as this translation is small, there’s no overhead. However as the memory pressure increases with concurrency, the kernel has to fight hard to populate the page tables and TLB.

To the kernel, all the processes and the threads within a process are tasks. When VM_SHARED is set via MAP_SHARED from the user space, the kernel ensures the mapping is shared across tasks with their page tables populated as well. This includes threads within a single process. All the books, articles and resources use the term process in the context of task, but misses the whole point and fail to explain this critical difference.

When MAP_SHARED is used, the initial process/task creation could be fractionally slower as the page tables gets filled. However once the page tables are hot, the worker threads will be ready to rock and roll and the address translation is the only overhead they will have to endure. This will not cause any page faults.

This was never a problem in the multi-process architecture as they always communicated through shared memory with hot page tables.

The book “Understanding the Linux Kernel” goes in depth in explaining the finer details about how it is implemented in the kernel in the Memory Management (chapter 8) and Process Address Space (chapter 9). It is a must read for curious programmers on Linux (even when not programming in kernel).

There are multiple ways in which this problem can be addressed. We settled on a simple solution to directly use mmap with MAP_SHARED with a RAII wrapper. That did all the trick as we didn’t have to support resize as a use case. For what it is worth, boost::interprocess library has this nifty little wrapper called mapped_region that does this job perfectly, in conjunction with anonymous_shared_memory function. Since the mapping is within a process and not across processes, MAP_ANONYMOUS was preferred. If it were across user-space processes, the MAP_ANONYMOUS flag should not be used and an underlying file descriptor (probably via shm_open, or open) shall be used with mmap. That’s how shared memory implementations in the kernel work, as the user-space processes just need to have a file name as common reference.

The change was deployed and voila, the performance is back to normal as if operating with smaller gallery. Overall resource usage was much less than the multi-process architecture as the per-process overhead has been eliminated.

I really like the way these seemingly semantically unrelated, but humanly related flags MAP_PRIVATE and MAP_ANONYMOUS are named appropriately by the standards.

In layman terms, it’s like saying, I want to keep my things private to myself and I don’t want to share with the outside world. But if I do want to share, I will write to a personal diary (file). I will also stay anonymous, so that others won’t know who I am or that I even exist and thus my diary/file can’t be correlated to me. I’m quite sure everyone can concur with this in this current world where online privacy and anonymity are a lost dream.

That aside, the reasoning behind glibc allocator’s use of mmap with MAP_PRIVATE|MAP_ANONYMOUS as defaults, is privacy and anonymity. Which makes sense, because we do not want other processes to peak into the memory region of our process. That would be a security nightmare. But I’m not sure I agree on this for inter-thread design. Threads inherently share the same process space and thus the heap. MAP_PRIVATE gets a copy-on-write mapping for performance reasons (may be). MAP_ANONYMOUS will ensure the mapping is initialized to zero. So the performance optimization is wasted away. However this doesn’t make sense for user-space data structures std::vector or malloc for that matter (FWIW, malloc, although a function, has it’s own internal data structure under the hood). No one is going to throw away a memory region after allocation without writing something into it, after all, why else will they allocate in the first place? As the size of memory being requested is large, it makes sense to use MAP_SHARED|MAP_ANONYMOUS as the default in glibc.